Provo, Utah, November 21th, 2016 – Local startup company Wasatch Bike Components LLC announced that it has released a new, innovative bike pedal that utilizes magnets to attach rider’s feet to their bicycle pedals. They launched a Kickstarter campaign on November 18th and have received over $8,000 (more than 50% of their funding goal) in under three days. 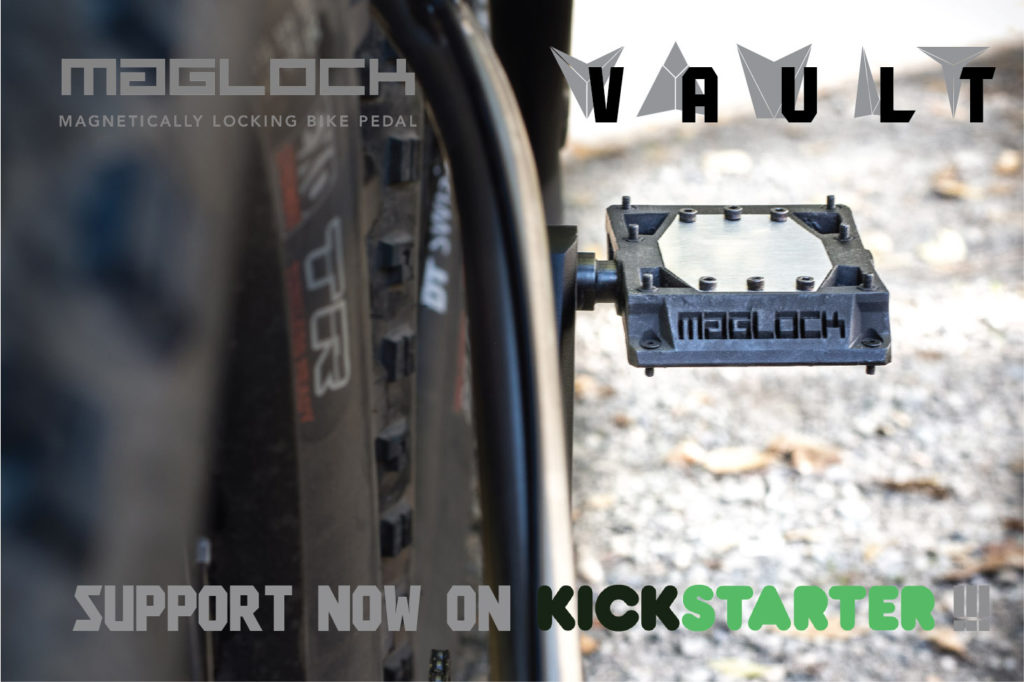 This new bike pedal, the Vault, is an inexpensive, lightweight plastic composite pedal that enjoys all the benefits of a magnetic bike pedal. The new technology allows riders to clip into their bike pedal via magnets inside of the bike pedal and a steel clip attached to their typical biking shoe. The Vault pedal is perfect for riders who are interested in advancing their bike skills by clipping in yet are hesitant to use traditional clipping pedals. This hesitancy is due to the steep learning curve of clipping pedals and the possibility of crashing due to not being able to unclip.

Feedback from bikers so far has shown that the Vault MagLOCK Bike Pedals works great for many rider types. Amputees, those with orthopedic implants, and those with physical disabilities have found that the MagLOCK Bike Pedals work well for them since they are easy to clip into and out of. See the mind-blowing experience of a mountain unicyclist using the pedals on the recent Kickstarter video.

“Clipless” bicycle pedals, in which a steel cleat attached to the sole of the rider’s biking shoe clips in and out of a mechanism in the pedal, are very popular with cyclists. They maximize pedaling efficiency, plus they help prevent riders’ feet from accidentally slipping off the pedals when going over rough terrain. Some riders, however, find the traditional clipless pedals too difficult to quickly clip out of. Additionally, they don’t work well with regular footwear. This is because the clipping mechanism protrudes from the pedal surface, making it an awkward surface to stand on. The MagLOCK Bike Pedal truly a clipless pedal as it does not have this clipping mechanism.

The Vault pedal looks and functions like a typical mountain bike platform pedal, but contains a stack of rare-earth magnets within a user-accessible compartment in the middle. Those magnets are attracted to a steel piece that is mounted to the sole of the rider’s biking shoe. These steel shoe pieces are compatible with standard biking shoes with the two-bolt pattern that are used for the “clipless” bike pedals.

Unlike clipless bike pedals, which are disengaged from the pedal by twisting the foot to the side, the rider is able to simply pronate their foot to the left or right to release from the Vault MagLOCK Bike Pedal. Or they can slide their foot out to the side to unclip. According to David Williams, a Salt Lake City-based mechanical engineer, this is a more instinctive movement, particularly for mountain bikers who suddenly feel themselves tipping over.

The amount of magnetic attraction between the pedals and shoes can be adjusted by adding or removing magnets within the pedals. This means that newbies could start with a minimum of force, so they can easily get their feet out as needed, but then increase the force as they get more comfortable with the system.

A maximum of approximately 25 – 30 lb (11 – 14 kg) of attractive force is reportedly possible. Williams says that this is enough to keep the shoe attached to the pedal on upstrokes when climbing hills, and also when going over jumps. Because they have the form factor of regular platforms, the pedals can also be used with ordinary street shoes when riders just want to commute, run errands, or drop a particularly intense downhill line. It is estimated that a set of Vault pedals will weigh around 600 grams.
Riders who have used the MagLOCK Bike Pedals have the following feedback.

“I just installed my pedals today! My first impression is that they are AMAZING! I had no trouble staying “in” the pedals in spite of pulling up really hard to climb a big hill here in Seattle. I just ordered a second set of plates for my other bike shoes since I am now all in with these… Thanks again for a great product. I look forward to much more flexible morning and afternoon rides to and from work!”
-Chris, Seattle

“Sensations after test are so great, it’s like magic, 360° pedaling and free to stop on any moment with no problems of being captured.”
-Tito, Spain

“I was surprised by the strength of the magnets…too strong to start. I took out 4 magnets per pedal for faster unlocking…”
-Seb, Cambodia

For now, you can pre-order a pair of the Vault MagLOCK Bike Pedals by pledging $80 (plus shipping) to the MagLOCK Kickstarter campaign. Shipping is estimated for May 2016, just in team for the bike season next year.
More information is available on the Kickstarter campaign site or the MagLOCK Bike Pedal website.
https://www.kickstarter.com/projects/1801092093/vault-magnetic-pedals-maglock-bike-pedal