Salt Lake City, Utah, July 13th, 2015 – New startup company Wasatch Bike Components LLC announced today that it has made available the revolutionary MagLOCK Bike Pedal via a rewards crowdfunding campaign on Kickstarter. The new technology allows riders to clip into their bike pedal via magnets inside of the bike pedal and a steel clip attached to their typical biking shoe.
“Clipless” bicycle pedals, in which a steel cleat attached to the sole of the rider’s biking shoe clips in and out of a mechanism in the pedal, are very popular with cyclists. They maximize pedaling efficiency, plus they help prevent riders’ feet from accidentally slipping off the pedals when going over rough terrain. Some riders, however, find them too difficult to quickly snap out of. Additionally, they don’t work well with regular footwear. This is because the clipping mechanism protrudes from the pedal surface, making it an awkward surface to stand on. This is why Salt Lake City-based mechanical engineer David Williams has created the MagLOCK Bike Pedal.

The red or black anodized aluminum pedal looks like a typical mountain bike platform pedal, but contains a stack of rare-earth magnets within a user-accessible compartment in the middle. Those magnets are attracted to a steel piece that is mounted to the sole of the rider’s biking shoe. These steel shoe pieces are compatible with biking shoes with the two-bolt pattern, same as what is used for the Shimano SPD system or Crank Brothers system (the “clipless” bike pedals). 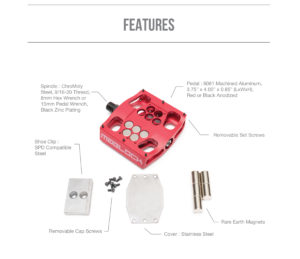